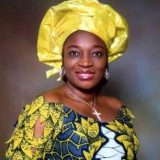 Ekwunife was born on December 12, 1970 in Igbo-Ukwu, Anambra to Emmanuel and Lucy Ogudebe. Ekwunife attended University of Calabar and graduated with a bachelor’s degree in Business and Accounting in 1993. She went on to earn her MBA degree from Nnamdi Azikiwe University in 2002.

Ekwunife had a career in banking where she rose to be an area manager. She married a businessperson from Nri community Anaocha LGA. She and Chief Larry Ekwunife have children.

Ekwunife stood for election twice unsuccessfully. She was elected as a representative in 2007 for Anambra’s Anaocha/Njikoka/Dunukofia constituency.

In 2015, she was elected to the Nigerian Senate. She was one of the six women elected to the 8th National Assembly. The other women were Rose Okoji Oko, Stella Oduah, Fatimat Raji Rasaki, Oluremi Tinubu and Binta Garba. Ekwunife had won the 2015 election by switching from one political party to the other. Because of this her election was challenged and in December 2015 her seat was declared vacant. Ekwunife was unable to get her former political party to back her for the bi-election for her former seat.